I love Reading Challenges. I’ve tried so many times to do them and once upon a time, when I first started blogging I completed them. Often! It was a great way to find new titles while feeling productive.

I fell off them for a long time because I found it really hard to do the Challenges while also keeping up with my Review Requests. But this Challenge? It sounds a lot of fun.

My co-blogger Taschima, going for the Rogue Path, posted about her Challenge Stats so I recommend you go check it out since Bard and Rogue share a tile together (though we do not share any books at this point in time).

#TheReadingQuest is a reading book challenge hosted by readatmidnight.com. This is the description according to her blog’s sign up post:

“I invite you to join me on a reading adventure based entirely on a video-game quest. In this challenge, you’ll be embarking on a journey to conquer your TBR pile through a series of stages. You’ll read new stories, gain experience, and level up a character of your choosing.”

I mean come on, I love Video Games, I love level’ing up and reading. What could go wrong amirite?

You get to choose between 4 different characters archetypes: Knight, Bard, Mage, and Rogue. Both Tasch and me are joining this particular challenge, and so we agreed that each of us should choose different characters in order to have more variety and cover more ground. I choose… 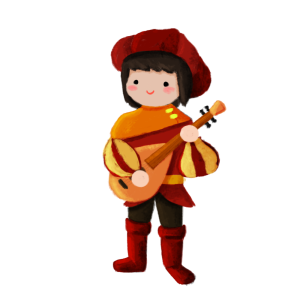 Bard: While the bards may not engage in direct combat, they make up for it with their intimate knowledge of songs and stories. They will travel through the Fifth Down path on the quest board, reading famed tales and singing lost songs.

Originally I wanted to do the Mage, because look I’m hella set on books with magic or mythology, but The Bard also has enough of my preferred genres to interest me. To be fair I normally play a Knight or Rogue character in RPGs, I like to melee the living daylights out of opponents and sneak around. Mages I can’t usually play because I’m not crafty enough with Magic. The nice thing is that we can do multiple paths! So I might still do all of them!

As a Bard, here’s what I need to read to complete my Quest:

I had some issues with finding a Banned Book (which is the shared Tile with Rogue) as by in large I’ve either read the books or have no interest at all. Eventually I came upon this however:

Banned Why? Banned in 2014 for “anti-Family, nudity, offensive language, sexually explicit, and unsuited for age group” (ALA Website)

A BOOK THAT HAS A TV/MOVIE ADAPTATION:

Type of Adaptation: Animated series (currently 2 seasons, with a third rumored to eventually occur) released domestically for streaming through Crunchyroll and Anime Network.

Which Fairy Tale is it Retelling? Snow White and Rose Red, yeah there’s more than one Snow White running around guys. You can check out the original story and its multiple versions over at SurLaLune Fairy Tales.

A BOOK COVER WITH STRIKING TYPOGRAPHY:

A BOOK TRANSLATED FROM ANOTHER LANGUAGE:

This challenge starts on the 13th of August and goes all the way to September 10th. If I get Bard done, I’m debating if I want to move onto Mage or if I want to tackle some of the Side Quests. What do you guys think?

One thought on “I Pledge Myself to the #TheReadingQuest #BookChallenge #BardEdition”