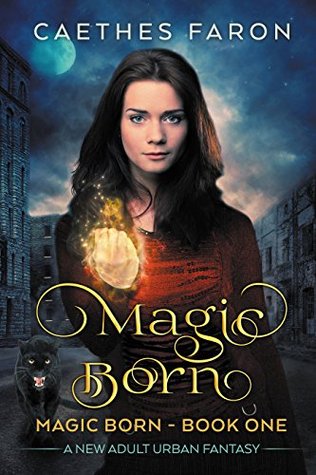 After the death of her parents, Kat Thomas retreated from college life into an online fantasy game.

But what if the game she plays is closer to reality?

When a panther shifter named Alex knocks on her door one night, he delivers a message and a package. Kat’s birth mother was a powerful mage who has just been murdered…and now the killer is after Kat. The package contains her mother’s talisman: an amber necklace that latches onto Kat’s neck and attacks anyone who tries to remove it. Before she knows it, ice is shooting from her hands and she’s on the run from an assassin.

Kat must navigate a world of magic and intrigue, fight the forces who want her dead, and protect her friends from becoming collateral damage–all while coming to terms with her new identity. She’s heir to a powerful legacy, but only if she lives long enough to claim it.

Con – Kat in the beginning (she gets better)

Review – I quite enjoyed this book, but I couldn’t put my finger on WHY. Kat vacillated between being really on point about her concerns in a clear manner and dragging down the plot with her whining. Alex though…he was possibly one of the most rational, pragmatic and otherwise useful adventure sidekick (there isn’t a romance to speak of, though there is attraction, so maybe?). Their conversations in the beginning were like this:

Alex really gave no chucks and was happily content to tell Kat she was not acting in her best interests. Which happened more often in the beginning then later on.

The story itself is a basic sort of “orphan finds out their part of a magical empire” tale, though what originally attracted me to it was that Kat is a gamer so that added an interesting angle to see how she would react to being in a real fantasy adventure quest.

Overall though, I enjoyed this enough to purchase it once I was done with my Kindle Unlimited copy. I want to see where this goes and I’m looking forward to seeing more of Alex :ahem: in the next installment.