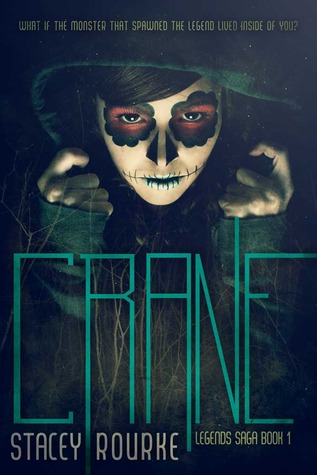 The Horseman is unending,
his presence shan’t lessen.
If you break the curse,
you become the legend.

Washington Irving and Rip Van Winkle had no choice but to cover up the deadly truth behind Ichabod Crane’s disappearance. Centuries later, a Crane returns to Sleepy Hollow awakening macabre secrets once believed to be buried deep.

What if the monster that spawned the legend lived within you?

Now, Ireland Crane, reeling from a break-up and seeking a fresh start, must rely on the newly awakened Rip Van Winkle to discover the key to channeling the darkness swirling within her. Bodies are piling high and Ireland is the only one that can save Sleepy Hollow by embracing her own damning curse.

But is anyone truly safe when the Horseman rides?

Cons – The alternating chapters disrupt the flow of the story, at times the story gets lost in its own mythology, Ireland gets super annoying at times

Review – At first I wasn’t certain if I would be finishing CRANE.  Well to be honest I wasn’t sure if I was going to buy and read CRANE, never mind actually finish it.  Its not, generally speaking, my cup of tea as far as paranormal novels go.  However I do find the tale of the Headless Horseman interesting.  As one of the few stories of American folklore that I remember reading, its really the only one I’m willing to go out of my way read/watch re-imagining of.

But that cover!  Its very striking and eye-catching, so when it was on sale I felt I had no reason NOT to buy it.  The justifications of a bookaholic…

After a bit of confusion regarding the alternating chapters (more on this later), I found myself hooked.  I wanted to know the secret that the village of Sleepy Hollow was hiding, I wanted to know why Washington felt a need to change the story to hide that truth, I wanted to know who was killing the townspeople.  Though I was more interested in Ichabod’s plight and the revelation of who the killer was (and why) felt rushed, but it was a hell of a ride.

Ireland isn’t easy to relate to.  She’s abrasive, paranoid, hot-tempered and irritable–things that aren’t made better after she moves to Sleepy Hollow and everyone starts lobbing insinuations about her because of her last name.  Granted after meeting her former boyfriend it becomes rather obvious why she has little reason to trust men, but it grated on my nerves at times.

Ichabod’s last days after he took up the school master position in Sleepy Hollow, moving there with his two friends from his days in the Revolutionary War (Washington Irving, a lawyer and Rip Van Winkle, a…lazy arsehole womanizer), are vastly more interesting at first.  We see the story from two ends of the same ribbon; one end is Ichabod as he draws towards the beginning of the secret and the other is Ireland as she draws towards the “truth” of the secret.

Though for the life of me I don’t quite understand why Ichabod put up with Rip or Washington, the two made sport of his name and while Rip ultimately has to take the brunt of the consequences in hiding the secret, they both still made out better then poor Ichabod.  Let this be a lesson kids, doing the right thing? You get screwed for it and have to wait a loooong time for it to be right again.

When its revealed who’s doing the killings (and why) things get a little confusing.  I’m not entirely sure if Rourke meant for it to be this way because there needs to be mystery to uncover as the series progresses or if I was having a failure of understanding, but I was left with many more questions then answers by the end.

Regardless I can’t wait to start RAVEN, which as you may guess has something to do with Edgar Allen Poe and to get my hands on STEAM, which features HG Wells.  Here’s hoping there is an actual time machine…