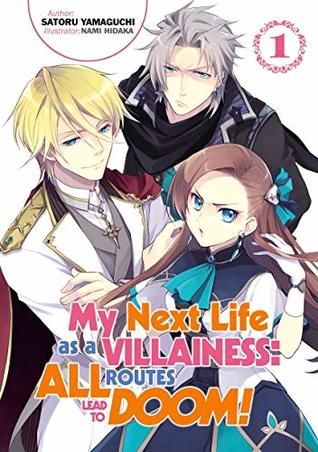 After hitting her head particularly hard one day, Duke Claes’ daughter, Katarina, suddenly recalls all the memories of her past life: that of a teenage Japanese girl. Just before her untimely death, this girl recalls playing an otome game… that is exactly like the world she’s living in now!

She is now Katarina Claes, the antagonist of the otome game, who nastily hounded the protagonist until the end. Knowing all the possible outcomes of the game, she realizes that every single possible route ends with Katarina being murdered or exiled! In order to avoid these Catastrophic Bad Ends, she has to use her knowledge of the game and her own wiles, starting with breaking off this engagement with the prince…

Will Katarina survive while making her way through this world, where bad flags trip at every turn? Find out in this reverse-harem rom-com, led by everybody’s favorite villainess!

Meet Katarina Claes, daughter of the Duke, and for all you otome worshippers like me, the one you might recognize as the female antagonist in Choose Your Otome Title. Beautiful, intelligent and determined she makes the Otome Heroine (aka you) life horrible but ultimately either loses to the Heroine or destroys the Heroine’s happiness.

This Katarina however remembers the horrible Bad Ends fated to be her Doom if she continues on recklessly and WILL NOT STAND FOR IT.

Adopted brother kills her because he falls for the Heroine thanks to his loneliness? GUESS SHE’S GOING TO BECOME THE BEST BIG SISTER NO MATTER WHAT

Fiancee kills her because he falls for the Heroine and hates Katarina’s bullying behavior? TRY TO BREAK THAT ENGAGEMENT WITH HIM NO MATTER WHAT.

Classmate’s aloof older brother kills Katarina for bullying his fragile younger sister who is friends with the Heroine? BECOME BEST FRIENDS WITH THE YOUNGER SISTER NO MATTER WHAT.

And so on. What’s amazing is that Katarina becomes the Otome Heroine in her absolute determination to not become the (future dead) Villainess. To the point where she accidentally starts using the romantic overtures the male love interests would say to the Heroine upon meeting her (in the game), on all of the girls she becomes friends with.

This hilarious, fun, and a great nod to otome players like myself. While this particular niche sub genre of isekai light novels/manga is becoming more popular (ACCOMPLISHMENTS OF A DUKE’S DAUGHTER, and THE DAUGHTER OF THE ALBERT’S HOUSE WISHES FOR RUIN both come to mind) I definitely wouldn’t mind EVEN MORE.

(Isekai “in another world” – basically hero or heroine falls out of our normal world into a fantasy world. We also call them “portal fantasies” in Western fiction)

(Otome, basically a romantic Choose Your Own Adventure style game where the player – aka Heroine – makes branching choices to fulfill set goals to make guys fall in love with her. There’s usually three kinds of endings – Good End, or hey you got the guy!; Normal End, or hey you are friends/you didn’t suffer unduly; and Bad End, or you’re likely dead or kidnapped or trapped unhappily)

Published by: J-Novel Club (english translation)
Release: November 17, 2018
Series: My Next Life as A Villainess Book 1
Add it to Goodreads