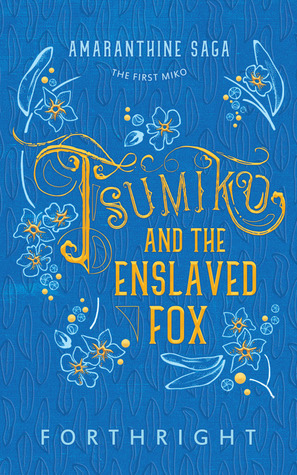 Review – Having had Forthy’s fanfic writing in my life since my early 20s, this leap into original fiction was well done.

Echoes of familiarity will pluck at attentive fans as several pieces are adapted from her popular fics. Hisoka-sensei being the most obvious, but the story pace and the telling of it are far better indicators.

Tsumiko is passive at first – having lived her whole life in a secluded school (Saint Midori’s) first as a student and later as a teacher, she had no reason to expect that would change. And yet….well fate has a way of finding ways for all of us to be useful in much more interesting ways.

Argent, both by virtue of inhabiting several of my favorite character traits as well as being who he is, was a lot of fun. Of the Fox Amaranthine clans, he is as scornful and mischievous and frustrating as he is elegant and caring and resourceful.

There is much in this Tale which is not pretty. There’s a sort of…dark undertone that while never graphically shown is frequently spoken of in regards to just how far beings will go in cruelty when they have the power to do so and the knowledge its against someone powerless to prevent it.

Rape is discussed, as well physical abuses and emotional abuses. Again not graphically, but the emotional (and physical) consequences are part of the story.

While some of the world confused me, by in large I really enjoyed the world built here. Because of Tsumiko’s seclusion we are introduced as she is, giving readers a chance to catch up as she has to. In some cases this is vexing – I’m still hazy on much of Amaranthine political structuring. In others it’s fascinating as Forthy blended many different myths, legends, original ideas and fact to create some unique customs.

This is a slow burn story of acceptance, respect, love, and understanding. Tsumiko is not perfect nor is Argent always in the right despite his situation. They both have to learn to let go of preconceptions or expectations.