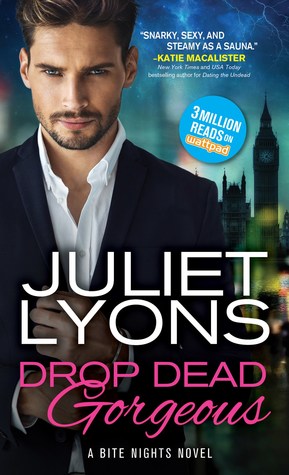 Mila Hart’s first experience with the hot new vampire dating site is a complete disaster. Turns out, her date is wanted for murder! But things turn around when she’s rescued by dashing vampire cop Vincent Ferrer. Dangerous and drop dead gorgeous, he’s just the vampire hottie Mila was hoping for.

Haunted by his past, Vincent can’t risk falling in love again, even if Mila charms him more than anyone he’s ever met. But when the killer from Mila’s first date seeks her out, Vincent is the only one who can protect her. Protecting his heart is a different story…

Pros – Communication! These guys excel at communication. Vincent is pretty awesome. I like Mila a whole lot.

Cons – Sigh I don’t know, something about these HEAs just don’t sit well with me

Notes – Sooo…my ARC copy is called “ROMANCING THE UNDEAD” (which is this here). So we’re clear I like that cover better only because the guy on DROP DEAD GORGEOUS looks nothing like the description of Vincent. Also I think the illustrated-like cover suits the light-hearted nature of the book overall.

Review – So a lot of my issues with Book 1 (DATING THE UNDEAD) are solved here, though not the issue of the “cure all, catch all almost Deus ex machina” ending.

What are the chances that Mila would know someone who could solve their problem? With Logan and Silver’s HEA, aside from my other issues with it (read about that review here, warning spoilers), it made sense. I’ve seen that particular Get Out of Vampire Jail free card before. It couldn’t work here, since Ronin gets to shine (or not) in Book 3, but that didn’t stop Lyons from finding a way that quite frankly felt…less cohesive.

That said I liked the villain angle better here as well as the relationship progression.  The villain threat was always lurking and wasn’t always clear why, so it made everything he did just a little bit more…sinister because of it. Meanwhile, yes lust hit hard and early on, but both Mila and Vincent had good reasons to be hesitant. Reasons that they both communicated before they went “all the way” and reasons that shouldn’t have been COMPLETELY dismissed even if they did somehow become less important in the grand scheme of things.

Vincent was, to be frank, adorable as heck. Reading how at loose ends he was constantly, well that was fun. Here was a guy who managed to adapt all those useless courtier things he learned into a job he could be proud after all. So watching him come undone because Mila ate some cereal was heart warming. Mila seemed the more confident one, she wasn’t under any real delusions about what it would mean to get with a vampire and she weights those risks.

She knew what she wanted and never felt compunction telling Vincent (not even in bed). And she had honest conversations with him about her expectations as well discussing possible solutions. Vincent didn’t make or try to force assumptions on her either, which after freaking Logan in DATING I am so happy about. Seriously. I nearly wept when they had a conversation and Vincent’s reasons were much more practical and less driven by the assumptions he had about how Mila would want to live her life.

Vague spoiler, near the end Mila wants to broach a pretty obvious issue the two should have a plan for. She presents her argument, she offers a solution, she listens to Vincent’s objections and his counter offer. Neither dismisses the other’s idea and while the solution is…not to my cup of tea, its a solution they both agree to go forward with.

I’m less excited for the next book (about Ronin and Catherine), but I wonder if their ending will be the same as Logan and Vincent’s?