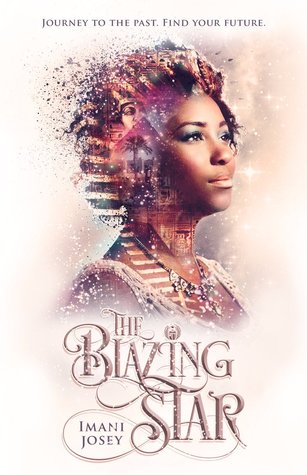 Sixteen-year-old Portia White is used to being overlooked—after all, her twin sister Alex is a literal genius.

But when Portia holds an Egyptian scarab beetle during history class, she takes center stage in a way she never expected: she faints. Upon waking, she is stronger, faster, and braver than before. And when she accidentally touches the scarab again?

She wakes up in ancient Egypt—her sister and an unwitting freshman in tow.

Mysterious and beautiful, Egypt is more than they could have ever imagined from their days in the classroom. History comes alive as the three teens realize that getting back to the present will be the most difficult thing they’ve ever done. Stalked by vicious monsters called Scorpions, every step in the right direction means a step closer to danger.

As Portia and the girls discover that they’re linked to the past by more than just chance, they have to decide what it truly means to be yourself, to love your sister, and to find your way home.

Note – Isn’t that cover beautiful? You should also check out the book trailer, also gorgeous!

Spoiler – my historical note at the end contains spoilers for the Egyptian/Ancient Personages that appear in the book as well as documented history. Please refer to my GR Review if you’d like to avoid all of that.

Review – Overall I enjoyed this. In some ways this recalled to me a couple of my fav mangas (Ouke No Monshou & Anatolia Story – the first about Egypt the second about the Hittites) as they were also about special modern girls who get thrown back in time because of magic and the will of the Gods, thus finding themselves constantly in peril due to their specialness. So we’re clear, this is a trope I adore.

For me my only real grievance was with Alex. TBS is from Portia’s POV and for a time she is separated from Alex. When they meet up again we have no real idea how she had spent her time. Portia, and to a certain extent Selene, both got lucky (or it was by the will of Ma’at) in that they wound up at the temple eventually. They both acclimated quickly, but we saw that settling in period.

Alex just seemed to reappear, have a job/life that was easy to sneak away from with no one looking for her and was focused on one thing to the exclusion of common sense. Her actions made little sense to me and her negativity grated on me almost as much as it did on Portia.

The rest of the book I found engaging as hell though. I loved Sikara and Weret, I enjoyed Portia’s interactions with her solider Savior and the others. While I think she was a little naive in many ways, I could understand her feelings as to why. I liked Tuya (the Hyksos princess), and even found the enemy to be at least charismatic at times.

The reveal about why the girls were chosen is a bit hastily done and there’s a lot of names tossed around that get no context until later (usually with a bit too much “let me tell you the history” via long info dump) so I found myself forgetting relationship connectors at times. The historical time setting is pretty vague* as well which possibly on purpose since, hey changing history…

For anyone wanting to know about romance in here, it’s largely understated and doesn’t get in the way. Portia keeps her head in the game (mostly, she is still only 16 she gets to dwell a little) and shows a surprising amount of maturity towards it. I’ve seen others discuss this as a case of insta-love, but I didn’t see it that way. After their initial meeting, Portia acknowledges that while she’d be interested in more its not the right time (in so many ways) and their individual ideas of “more” varied drastically.

I do wonder, what with the reveal about the girls’ involvement due to Ma’at how that will play out, but if that is Ma’at’s wish then it is to the right.

*Historical Note – the best as I can figure this is set in the 19th Dynasty. If the Seti mentioned in this book is Seti I, son of Ramses I, he’s the Pharaoh who sparked the whole thing with banishing Moses (this was later in his reign/life). His consort/Queen is listed as “Tuya”, the mother of Ramses II, but she was the daughter of a general not a Hyksos Princess. Additionally one of Seti I’s names is “Setey Merenptah”. That all said, this is all speculation based on what I remember from my history books, my main focus was really on Hatshepsut growing up.

One thought on “Book Review: The Blazing Star”