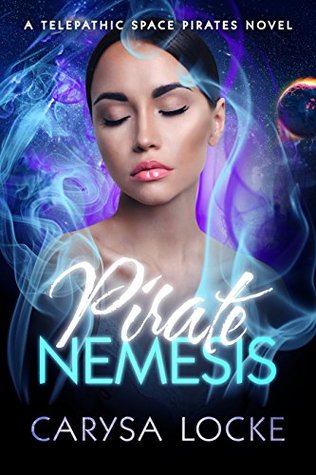 Mercy Kincaid is a fugitive from her own family. Her dangerous telepathic gifts make her a target. So is anyone she gets close to. When her best friend is captured and tortured, Mercy’s only hope is to reunite with the family that tried to murder her as a child. She trusts few among her blood relatives, but finds herself intrigued by an enigmatic and dangerous killer.

Reaper has spent a lifetime watching his people die. He’s vowed to kill anyone who jeopardizes their survival. Mercy’s gifts are the biggest threat they’ve faced in eleven years, since a biological weapon nearly annihilated the pirate colonies. But Reaper realizes her talents can either destroy them, or save them. He must decide if he’s fallen victim to her power, or if he can truly trust the beautiful woman and her compelling abilities. If he makes the wrong choice, everyone dies.

Cons – I have to wait for the next book

Spoiler – Technically “Pirate Bound” is the prequel to this, so this book spoils that book for relationship developments.

Note – Wee bit of profanity in this review. That’s my warning.

Review – :bright shining eyes: Guys. Guys. No seriously GUYS. This book was such a welcome treat for me! Look I’ve been on a fanfic kick lately bc honestly a lot of the books I’ve read haven’t EXCITED me. Oh they’ve been well enough, mostly, but not let me stay up until 4am to finish exciting.

PIRATE NEMESIS, the first book in the “Telepathic Pirates” series, was a complete accidental buy. Well ok not an accident so much as it was on sale and I bought it cause I had some extra money laying around. My thirst for a sci-fi romance series or book to compete with Linnea Sinclair, Jayne Castle and Carol Van Natta hasn’t lessened*. But too often I’ve been let down.

There’s a certain balance between scifi, banter, chemistry and action I require that seems hard to fulfill.

PIRATE NEMESIS knocked it out of the park tho.

I loved Mercy from the get go. I loved Reaper and Atrea and Wolfgang and Dem and Doc and Cannon and Vashti from the get go. I dug the fact that Mercy was not sure of herself but she damn well didn’t let that get in the way of doing things her way. I liked that she felt a very real sense of worry that she could turn vicious, like her grandmother. I liked that Locke had a casual sense of diversity to the whole cast. I liked the romance was a slow burn bc neither felt COMPLETELY ok with the other for a while (for legit reasons).

The bad guy/final confrontation was interesting not for what the bad guy(s) did but for how it gave clarity to Mercy about the difference between absolute control, control thru fear and control through understanding. I liked that the end was kind of sappy.

I hope more answers are forthcoming. I also ship Treon/Atrea for no reason (they didn’t even have a scene together!) then Atrea will SO fuck up his arrogance and it will be glorious to watch. Also I hope the series goes long enough that Snow White is rehabilitated.

(*) Ruby Lionsdrake, Veronica Scott and Anna Hackett are all well loved as well, but I’ve found my enjoyment somewhat hit or miss with the different series they each have whereas Jayne Castle, Linnea Sinclair and Carol Van Natta I can (and have) reread many of their books over and over.