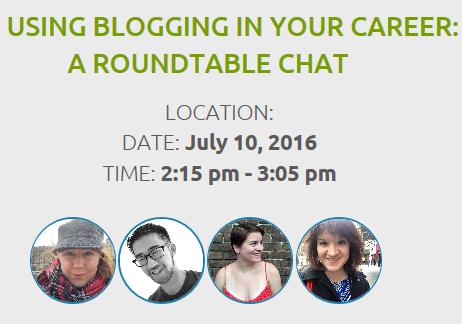 For many, blogging was the first step to realizing nothing could be better than a lifetime working in books. Today, a number of bloggers now work in the publishing industry or very close to it. Panelists will discuss what made them want to transition, how it happened, and how blogging helped.

I’ve known for a long time that I want to effectively use my blogging passion in my career. I recently began talks to be the social media manager for my local indie (more info when that becomes settled!) and want to grow our presence. With that in mind I probably attended the panel with a different skew from everyone else (the general consensus was “publishing job!” for which I know I’m not suited for honestly).

Julie started the panel off by asking the panelists why they began blogging. Estelle, much like myself it would seem, began because she needed a creative outlet from her day to day job. She needed something that made her happy. It was also how she made friends when she moved to New York. Since she came into publishing late she’s older than many of her coworkers, so the sense of community she got from being a blogger has really helped her.

DJ said he became a blogger after he decided he wanted to work in publishing. He called out Twilight as the book that re-ignited his passion for reading (which, don’t worry DJ, it ignited my love of YA books and I still hold it fondly in my heart despite all things), so he wanted friends he could properly nerd out about books with. His parents have been very supportive of his choices and for him, it’s been a lot of networking opportunities.

Shae also came to blogging because of publishing; she lived in Florida—a state not known for being the publishing capital of anything—so blogging helped her make the connections she needed to go forward with her career aspirations. Blogging helped her gain experience in the industry, as well as helped her learn to approach people not as future connections to the job she wanted, but as people she could talk and relate with. Her advice was to view every person you talk to as a potential friend you have interests in common with first and if they become a professional awesome!

As for Julie she didn’t look at it as networking, so much as making friends.

The question of BEA (Book Expo America), as well as other industry events like ALA or ILA, and how important they felt going to BEA was [in order to obtain a job in the industry] came up. Estelle has only been once and said she never felt the need to go, either for the books or to meet industry folk (publicists, etc).

DJ said he didn’t think BEA is necessary. He had fun, found whenever he went to be great experiences, but BEA has started to evolve into a more consumer-driven show* so the opportunity isn’t what folk may think it is. When he first began going (and I have a feeling he began going about when I did) bloggers were not a presence quite yet so he had the ability to talk to people more so. He feels it’s not detrimental if you can’t go.

Shae was even more blunt – fun experience, great if your priorities are meeting friends or getting books or chatting up authors, but in the end its more important to weigh the financial cost against the reward. Especially when in this digital age you can make connections through email or twitter or whatever platform you prefer.

Along those lines the Julie asked the panelists what skills in blogging they wished they had taken more advantage of. For her she wished she paid attention to graphics and coding. DJ says that because blogging (like writing) can be very solitary, it can become very easy to forget how to interact with others, so that is something he had to work hard to overcome. Also if you’re going into marketing and/or publicity basic knowledge of Photoshop is a requirement.

Shae says coding would have been helpful to learn as well as how to use some of the social media platforms. She still isn’t quite sure how to use Snapchat (me neither Shae, me neither).

They skills they learned however have helped them. DJ mentioned that because of book blogging (both on his site and when he worked with RT Reviews) he learned how to effectively talk and think about books in a critical, but professional manner. Shae said that through her friendships in the community it made it easier for her to be accepted. Her industry friends vouched that they had known her for a number of years, knew how professionally she worked and that she would be able to handle the pressures of the job.

DJ also quickly pointed out that blogging helped him learn time management and organization, two musts in the publishing world.

Professionalism was discussed in regards to when you’re writing reviews and in general just communicating. DJ tried to keep his review balanced and uplifting. He advises the being able to point out weaknesses is a good thing as long as you can make it critical or productive. Snarky reviews are okay, he says “you do you” in regards to whether you feel they are what you want to be seen as your brand, but keep it constructive.

Estelle tried to be a respectful reviewer. Again you do you, but you can tell when someone is being genuine about their (harsh) criticism versus just being attack-y to be attack-y. Publicists and marketing people do take notice and they know, whether it appears they do or not.

Shae said she was always aware that others would be reading her blog—folk that she didn’t know, present or future – so she acted politely and professionally. For her, the reviews were for her readers first; she wanted to tell them what they needed to know in order to figure out if the book was for them.  Publishers and authors weren’t a consideration when writing her reviews. Going into any review with the mindset “I think this would make the book better for me” usually helped.

DJ pointed out that no one likes fake. Make your content as high quality as you would want to read. If you’re blogging just to get a job in publishing that will show, so you need to blog if you feel strongly about it.

In regards to how it can help during interviews, Estelle mentioned that it’s a good idea to have non-book blogs you follow to discuss. Everyone applying for publishing jobs will talk about this or that book blog that they love, think outside the box, especially if you are going into publicity. What other forms of media are covering their books? Magazines, newspapers, etc. Be ready to discuss what you think will be next “big trend” in publishing (especially YA). They don’t expect you to know or be able to predict, but the fact you have an idea is a big step.

There are a number of blogs you can follow for more advice, job listings and industry related information.

Shae recommends you follow authors you love (as they will often tweet about their publishing houses, editors, agents, etc so you have an idea of OTHERS you can follow), check out the news feeds for Variety or Entertainment Weekly as both publish book news.

Also read the acknowledgement pages of books. Often authors will thank their agent and/or editor (and hopefully everyone else who helped make their book a real thing), so you’ll find folk who will often retweet job postings this way. Shae urges that you follow the higher-ups AND the little people.

As to what they look for when working with bloggers now…Estelle commented that a lot of review policies she comes across seem especially harsh, with little room for negotiation. She also said that having things on your blog not related to books can be a helpful hand to publicists.

DJ echoes this sentiment recounting a story about how he saw a blogger was tweeting about Hamilton, so when he sent a proposal for them to review a book he was offering he included a professional, but recognizable quote from Hamilton. The response was instantaneous and effusive, breaking the ice in a way that a cold call email wouldn’t have.

They all agreed that you should not ignore specific instructions. If being part of the blog tour, or reviewing the book in general, they ask you to use a specific hashtag to be excited over it about—use that hashtag. They want to work with people who are on board with their marketing plans just as much as they are on board with being excited about books. Most of all though, be mindful of your platform and how you’re interacting.

It’s one thing to send an email that says “Hey, it’s been a little while since we last spoke, but I was hoping you could update me on the status of such-and-such? Thank you!” but to send a “You promised me a book, where the he** is it?” email is just rude and unprofessional and will get noticed.

Shae says her maxim is this “don’t shame your mothers”. If you say, or do, something that makes a person say (or think) “I can’t believe you were raised that way” there’s a problem with your interaction skills.

And finally we ended with a question about whether or not the panelists felt it was okay to keep blogging after getting their jobs. DJ knew going in that it would be a conflict of interest, so he made a conscious decision to adapt his blogging so that it wouldn’t be a problem.

Shae stopped for a twofold reason – one she doesn’t have enough time anymore and two, she knows that with how authors and imprints and publishing houses work an author she reviewed harshly could one day wind up being someone she has to work closely with.

Estelle is just exhausted. She talks about books all day at work, then to go home and talk about MORE books when she could instead just sit and enjoy a book? Easy choice. When she does feel the urge to blog she has friends she can turn to who are happy to have her guest post.

From the general atmosphere in the room it seemed as if the panel was a rousing success. I saw a lot of people nodding at comments and taking notes when advice was given.

For me it was an enlightening panel – not because I want to be in publishing (I really don’t think I’d be suited for it), but because the four were very different people who tackled going from blogger to industry in very different ways. They took something they were passionate about, which I can definitely relate to, and made it their livelihood. Much of their advice and experience is useful not just for securing a publishing job (which hey no guarantees) but also in life in general.

I did get a chance to ask about my questions, and I plan on poking at DJ DeSmyter as he worked at an Indie before. Okay and yes I won some books, so that was pretty awesome, but all in all it was a well-rounded and informative panel that I think a number of people got quite a bit from.