All right folks so you ventured with Greta as she battled her way across Mylena in GRETA AND THE GOBLIN KING, fought against the darkness in her and Issac’s lives in GRETA AND THE GLASS KINGDOM to read as she finally made it home.  So what’s next for our battle born beauty and her kingly love?

Well Agramon really doesn’t like to let go, Greta’s parents are very surprised by the changes in their daughter and oh yeah that wedding…

Tody is the first day of the blog tour (see schedule here) hosted by YA Reads Blog Tours and I have the distinct pleasure of reviewing the book!  Stay tuned for the giveaway at the end as well 😉

After spending the last four years trapped in a place of monsters, demons, and magick, the last thing the fierce teenage bounty hunter Greta expected was to ever be back on Earth. But a rare opportunity gives her and the Goblin King Isaac the opportunity to do just that. Now she’s home. With a boy in tow. And her parents have lots of questions.

Although Greta finally has her heart’s deepest wish—to see her family again—every step she takes to reconnect with them drives her further away from Isaac. Greta and Isaac planned for her to return to Mylena and become his queen, but she’s not sure if she can go back to that harsh world, though staying on Earth means giving up the boy she loves.

But a powerful enemy refuses to let Greta escape. A demon who will stop at nothing to destroy her and everything she loves. Even if it means following her to Earth and forcing her to face a fate as unavoidable as love itself.

Review: Conclusions!  I hate letting go.  I’m actually really BAD at letting things go. I mean if I enjoy it why should it ever end? (Reasons why I should never be allowed to have control over anything ever).  I really don’t want to lose Greta and Issac? I want to watch them do more ridiculous and silly thing together.

Except…well Jacobs gives them a final concluding book that makes me want to let them have a break and laze around for a while.

First, if like me you missed Issac in the 2nd Book (GRETA AND THE GLASS KINGDOM) don’t worry–lots of Issac! Part of Greta’s troubles begin and end with whether she can actually make a go of it with Issac. Sure when she was in Mylena, with no real hope of returning home, becoming his Queen sounded feasible. They love each other, he promised not to tie her down and really she could get a lot accomplished as his Queen.

But she returned home at the end of Book 2.  She now has to face her parents, the time she’s lost, the ability to regain everything she ever told Issac she wanted to get back to.  If she gives up Issac.

I was in this mainly for her struggle–my main staple of reading was portal fantasy novels and its continued to this day.  Countless hours have gone by in which I try to figure out whether I could give everything and everyone up for whatever the other life offered. Maybe I could? Its so hard to say.  So Greta’s struggle here was of real interest to me.  Honestly both sides of the argument could be made–obviously she could remain in her world, adapt to being a normal human and living life out that way. Eventually her time in Mylena would be regulated to the back of her life and treated almost like veterans treat their tours of duty.

Oh she’d have regrets, primarily over Issac and all the people she could have helped, but at the end of the day, after a few years had passed, it would have faded to memory like so much else.

Agramon, the villain with more lives than Rasputin, makes his final play here and this is something I’ve long admired about both Greta and this series–Greta does not hesitate when the chips are down and things need doing. Whether or not she was going to return to Mylena and stay there, she wouldn’t leave that world hanging. She’s a hero, in every sense of the word.

Did I enjoy this book? Yes. I can’t be read alone (omg why would you?!) and I recommend tissues if you at all feel invested in Greta and Issac (there are some…tense moments guys), but so very worth it. 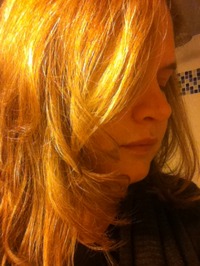 Chloe Jacobs is a native of nowhere and everywhere, having jumped around to practically every Province of Canada before finally settling in Ontario where she has now been living for a respectable number of years. Her husband and son are the two best people in the entire world, but they also make her wish she’d at least gotten a female cat. No such luck. And although the day job keeps her busy, she carves out as much time as possible to write. Bringing new characters to life and finding out what makes them tick and how badly she can make them suffer is one of her greatest pleasures, almost better than chocolate and fuzzy pink bunny slippers.

Winner’s choice of $5 Amazon Gift Card or a print or eBook copy of Greta and the Goblin King or Greta and the Glass Kingdom. As well as notebook, a pen with the words “Dream bigger darling,” and Hammond’s candy.

3 thoughts on “Blog Tour: Greta and the Lost Army”