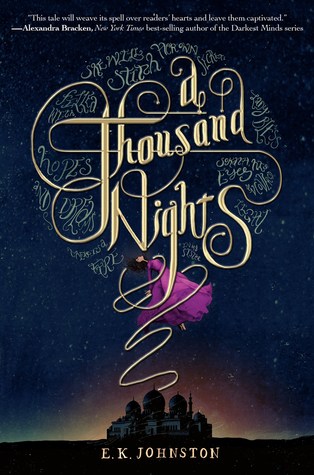 Lo-Melkhiin killed three hundred girls before he came to her village, looking for a wife. When she sees the dust cloud on the horizon, she knows he has arrived. She knows he will want the loveliest girl: her sister. She vows she will not let her be next.

And so she is taken in her sister’s place, and she believes death will soon follow. Lo-Melkhiin’s court is a dangerous palace filled with pretty things: intricate statues with wretched eyes, exquisite threads to weave the most beautiful garments. She sees everything as if for the last time.But the first sun rises and sets, and she is not dead. Night after night, Lo-Melkhiin comes to her and listens to the stories she tells, and day after day she is awoken by the sunrise. Exploring the palace, she begins to unlock years of fear that have tormented and silenced a kingdom. Lo-Melkhiin was not always a cruel ruler. Something went wrong.

Far away, in their village, her sister is mourning. Through her pain, she calls upon the desert winds, conjuring a subtle unseen magic, and something besides death stirs the air.

Back at the palace, the words she speaks to Lo-Melkhiin every night are given a strange life of their own. Little things, at first: a dress from home, a vision of her sister. With each tale she spins, her power grows. Soon she dreams of bigger, more terrible magic: power enough to save a king, if she can put an end to the rule of a monster.

Pros – Lo-Melkhiin, the thoughtful writing, the focus on what it means to measure up

Cons – Felt abrupt at times with transitions, while we get a feel for the main character (Lady-Bless) we get very little feel for everyone else, book confuses at times

Review – This is a book that took me by surprise.  I was instantly drawn to it – Arabian Nights for the win – and I really like the cover art work on the US edition (just not as much as the UK version). The squiggles are the words used to both cage and free the main character (who we will call Lady-Bless, lacking any other name).  It was not however the romance I thought it might be, or the action book I had hoped it would turn into.  Instead I read about a girl, Lady-Bless after her marriage, who isn’t the prettiest, cleverest, bravest or most athletic in her village, but she is the most loyal.  She understands how to stand out because she has spent her life in the shadow of someone who did.

Lady-Bless is scared of course – as one character says it would be dumb not to be given Lo-Melkhiin’s reputation – but she draws comfort from knowing she protected her sister, her town.  At a loss at first I appreciated watching Lady-Bless feel her way around in Lo-Melkhiin’s court and as his wife.  Mistakes happened, but always Lady-Bless came back to the traditions of her people (specifically the women) and those she was trying to protect.

I gotta admit I was somewhat confused in the middle part.  Once Lo-Melkhiin started playing mind games with her and she began talking about demons and shadowy corners of the mind and such I had to re-read some parts.  Its not that Johnston made them hard to read, but she packs a lot of information in those scenes.  Through body language, words both said and not, double meanings to conversations based on the book’s culture and conversations before–it sometimes was too much for me.  Lady-Bless notices a lot more than she lets on, so a fleeting gesture she saw several chapters ago won’t have significance until just that moment.

I mention Lo-Melkhiin as a pro for me and he was.  He was both irredeemable, but untouchable too.  There’s spoilers for some things I appreciated the most, but its important to note that he is never given a free pass.  What he’s at fault for may not be what he is condemned for throughout, but he is not given a pristine Get Out of Jail For Murdering Hundreds card either.  I found him fascinating and enjoyed his sharp banter with Lady-Bless.

Johnston gives us an examination of what it means to be yourself – oh not in so many words or so overtly, but as we watch Lady-Bless’ struggle to protect first her family than everyone, as we learn about Lo-Melkhiin and when he changed, as we’re shown the people in Lo-Melkhiin’s palace we’re given an idea of what it means.  We’re shown people who struggle with their place in the world, who wish for more but aren’t sure what that more is necessarily, who want to be stronger to protect, but fall into the trap of power.  The message isn’t “if you’re true to yourself you’ll find what you want” its more like “you are constantly evolving and if you try to stifle that evolution into something you think you are, you’ll lose everything”.

In the end I think this is a solid read.  There is no pat ending, no easily waved away bad guy or spoken spell that makes everything right again.  Johnston ends the book as she started it – with a nameless girl who did what she had to do to save her sister.